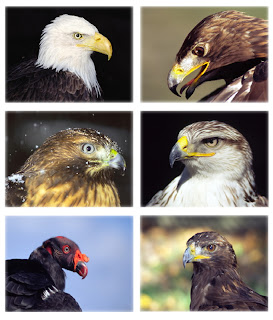 These are among the variety of migrating birds of prey appearing at RaptorFest in Grimsby. (Photo by Stuart McPherson)
The raptors are coming home to roost, flying all along the Niagara Escarpment.
Here's an opportunity to see the migration of thousands of hawks, eagles, vultures, falcons and more during RaptorFest next Saturday (April 16) in Grimsby.
The free event, from 10 a.m. to 3 p.m. at the Grimsby Peach King Centre includes walks to view the migration along with birds of prey events and nature exhibits.

The first walk along the Bruce Trail leaves the centre at 8:30 a.m., prior to the event opening.
Fifteen years ago the fest was started by enthusiastic volunteers to "increase awareness of the annual spring migration of birds of prey," said coordinator Rick Quirk, one of the founders.


It has now expanded to include an Earth Day celebration with many exhibitors and special attractions. 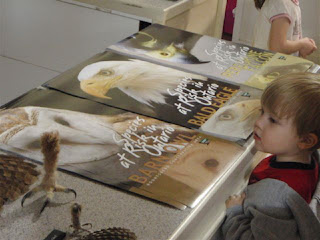 A youngster checks out the poster of birds of prey at RaptorFest.
Snowbirds heading north over the escarpment
The migration covers the "whole area along the Niagara Escarpment starting at the Niagara River, all the way north as the birds follow it," said festival publicist Carla Carlson who runs Niagara Nature Tours.
Many of the raptors travel directly over Beamer Memorial Conservation Area on Ridge Road in Grimsby.
The park is designated as an important birding area and has one of the best vantage points in the Niagara Peninsula to observe the migration. Its hiking trails also offer some of the best views of the escarpment and Lake Ontario.
Volunteers from the Niagara Peninsula Hawkwatch stationed at the conservation area since March 1 have so far counted more than 6,500 birds of prey on the move.
They're returning from South and Central America, the Caribbean and the U.S. to their nesting territories in Canada.
These species include bald eagles, turkey vultures, red-tailed hawks and broad-winged hawks.
Each year about 15,000 raptors are counted, "with 15 regular species including hawks, falcons, vultures and eagles," Quirk said.
Sightings include thousands of red-tailed hawks, turkey vultures and red-shouldered hawks along with dozens of sharp-shinned hawks, Cooper's hawks, bald eagles.
There have also been rough-legged hawks, northern harriers, northern goshawks, golden eagles, American kestrels, merlins and peregrine falcons sighted. 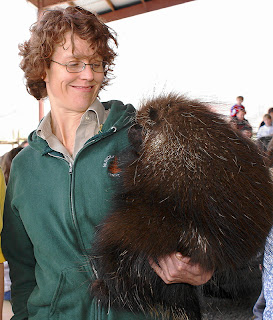 A handler from the Muskoka Wildlife Centre shows Quillber the porcupine at RaptorFest. (Photo by Stuart McPherson)
Raptors know the "back routes"
Seeking the shortest route with rising air on which they can glide to conserve energy, they flock to the escarpment.
Strong updrafts created by winds being deflected upwards as they blow against the limestone cliff are ideal.
The birds also drift high in the sky by "catching a thermal," a column of rising hot air created by the spring sunshine warming the ground.
"Many eco-tourist birding enthusiasts visit this area each year to witness this world-class raptor viewing event," Quirk said.
He and wildlife artist Rick Manners started RaptorFest that originated as a raptor art contest in schools. 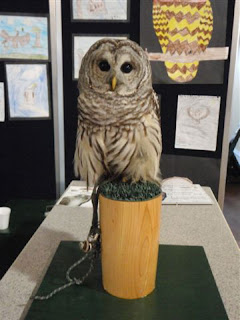 A barred owl will be among the critters on view at RaptorFest in Grimsby.
Birds of prey, critters perform
The festival will also show birds of prey from the Canadian Raptor Conservancy flying in the arena. Among those on view will be bald eagles, red-tailed hawks and great horned owls at 10:15 a.m. and 1 p.m.
Critters from the Muskoka Wildlife Centre include Clover the groundhog; Hunter the lynx; Quillber the porcupine; and Petunia the skunk. They appear at 11:30 a.m. and 1:30 p.m.
The Travelling Reptile Show is represented by Abby the alligator; Boots the tortoise; Sir Bites-a-Lot the tegu (lizard); and Marshmallow the python. They're on at 11 a.m. and 2 p.m.
The Earth Day party at noon will include cake and special guest Woodrow "Justin" the beaver and friends.
There will also be displays from various nature groups and awards to students who participated in the creative arts contests. 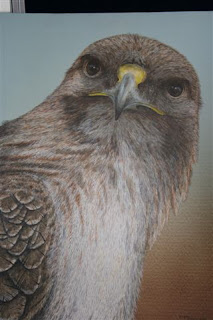 A painting of a red-tailed hawk by wildlife artist Rick Manners, a founder of RaptorFest.
Other raptor walks and talks
- On April 17 at 1 p.m., Carlson's Niagara Nature Tours will offer a spring nature walk at Beamer to meet the hawk watchers and stroll through the woodland looking for early signs of spring. www.niagaranaturetours.ca; 1-888-889-8296.
- Niagara Peninsula Hawkwatch holds its annual open house on Good Friday (April 22) at Beamer from 10 a.m. to 3 p.m. with bird identification workshops and "hawk talks" and walks.
Hawkwatch has been keeping statistics on hawk migrations since 1975 from March 1 until mid-May. The grand tally by the end of this season is expected to top 500,000 raptors with this year's first arrival being a peregrine falcon. www.niagarapeninsulahawkwatch.org
If you go:
- RaptorFest is at the Peach King Centre, 20 Livingston Ave., Grimsby (off the Queen Elizabeth Way). Free. Details/directions: www.raptorfest.ca
Jim Fox can be reached at onetanktrips@hotmail.com
Posted by Jim Fox at 1:51 PM