(News Release)
Where Authors and Readers Meet Stories and Storytellers
Summer and Stephen Leacock just naturally go together.
And nothing says summer more than Orillia’s annual salute to readers, authors and their books, the Leacock Summer Festival. 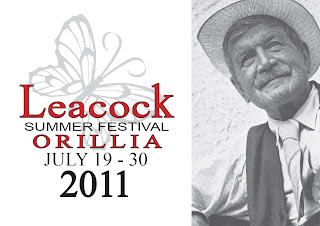 “There’s always been a major summer event marking Stephen Leacock, his literary accomplishments and his close association with his beloved Mariposa,” said Leacock Museum curator and festival producer Fred Addis.
“We are very fortunate to be able to make the link between Leacock, the historical figure, and some of the brightest and best Canadian authors today.”
The Leacock Summer Festival opens next Tuesday afternoon with Tea With Lloyd. Well-known Orillian Lloyd Dennis has compiled a collection of his popular children’s column Acorn Alley Tales which appeared in the Toronto Telegram in the late 1950’s. Lloyd will be signing copies of the recently published volume from General Store Publishing House at an afternoon tea and reception.
On Tuesday evening two figures who have almost single-handedly shaped our image of Canada will be featured. Douglas Gibson, legendary publisher of Alice Munro, Alistair McLeod and Pierre Trudeau will provide a preview of his forthcoming book Stories About Storytellers. Gibson credits Stephen Leacock for bringing him to Canada, affecting his very first job in publishing, and even helping him find a wife.
Local writer, editor and biographer Rae Fleming is also featured, reading from his recent biography of legendary CBC broadcaster Peter Gzowski.
On Wednesday evening, Governor General’s Award winner Allan Casey travels from Saskatchewan to present his collection of stories titled Lakeland: Journeys Into the Soul of Canada. Casey will explore how our Canadian-ness is so closely tied to our living by water and our desire to be near the water at all stages of our lives. Casey’s reading is co-presented with the Couchiching Conservancy.
A Slice of Montreal is a tip of the hat to Stephen Leacock’s winter home, the city of Montreal with a heavy dose of Mordecai Richler and smoked meat.
Charles Foran of Peterborough, winner of the 2011 Charles Taylor Prize for Literary Non-Fiction for Mordecai: The Life and Times will read his biography along with Montreal Gazette columnist Bill Brownstein, author of Schwartz’s Hebrew Delicatessen: The Story.
To top it all off, Schwartz’s Deli from St. Laurent Boulevard in Montreal will be sending a cutter to the festival to serve their legendary smoked meat on rye with the obligatory sour pickle and cherry soda. The event will close with the screening of the film Barney’s Version starring Dustin Hoffman and Paul Giamati and based on the 1998 Leacock Medal winning novel of the same name by Mordecai Richler.
Friday afternoon will be wall-to-wall pirates as the festival presents Treasure Island Family Fun from noon til 2:00 pm. There will be lots of costumes, treasure and complimentary hotdogs and cake. Admission is by donation.
When former Leacock Medal winner and musician Paul Quarrington passed away last year, it was decided to build on his passion and creativity by creating an annual Chair for Humour at the festival. This year’s chair event, sponsored by Lakehead University – Orillia, is the Friday Night Humour Showcase.
Terry Fallis, winner of the 2008 Leacock Medal for Humour for his Best Laid Plans will host the Friday night event and introduce 2011 medal winner Trevor Cole reading from his darkly comic novel Practical Jean.  Author and former grave-digger Charles Wilkins of In the Land of Long Fingernails fame, will also read along with Vancouver novelist and media commentator Steve Burgess, author of Who Killed Mom.
Saturday, July 23 starts off with New York Times #1 bestselling author and Young Adult writing sensation Kelley Armstrong reading from her recently released novel Spell Bound.
Penguin Canada has put together an exciting showcase of new fiction for Saturday afternoon featuring Randy Boyagoda, Suzanne Desrochers, Sarita Mandanna and DJ McIntosh.
Philosopher and author Mark Kingwell is back for the ever-popular Saturday afternoon Happy Hour at 5:00 pm. Kingwell will read and is joined by short-fiction writer Matthew J. Trafford and a reprise with Vancouver novelist and commentator Steve Burgess.
The festival first-time association with the Canadian Authors Association features the 2011 Canadian Literary Awards. Short-listed authors Shelagh Grant, Stuart Houston and Julie McCarthy will be featured in free readings on Saturday afternoon. Award-winning play-wright and novelist Tomson Highway will provide the keynote address at the awards dinner later that evening at Swanmore Terrace.
Stephen Leacock was a founding member of the Canadian Authors Assocation back in 1921.
Guernica Editions presents a Sunday showcase of authors including Len Gasparini, Bianca Lakoseljac, Michael Morella and Julie Roorda all wrapped around a Sunday picnic complete with BBQ and salads.
For the first time, the Leaock Summer Festival pushes into a second week of programming with the presentation of Stuart McLean’s Vinyl Café, live at the Orillia Opera House on July 29 & 30. Two shows by the three-time Leacock Medal winner are all but sold out.
“I think we’ve moved past any discussion about how people will read, whether from the printed page or e-books,” commented Addis. “What’s universally agreed is that people will continue to read, and that’s what will sustain authors and the books they write. Stories are cornerstones to our culture, they tell us who we are and how we relate to one another.”
The Leacock Summer Festival gets underway on July 19. For complete information or tickets call 705-329-1908, check out the museum website at www.leacockmuseum.com or follow the festival on Facebook.
-30-
Posted by Jim Fox at 3:41 PM