Tie-tapping, hand-clapping and down-home fun at the Walters Dinner Theatre

One-Tank Trip published July 9-10, 2011
(c) By Jim Fox
Yee haw, they’re having a hoedown down on the farm.
There’s lots of toe-tapping, hand-clapping and down-home fun at the Walters Dinner Theatre on the family homestead in Bright, between Woodstock and Kitchener.
So, forget about that long trip to Branson, Missouri and let that Ozarks’ style of country music theatre entertainment come to you.
The talented Walters Family Band entertains with a blend of humour and country music enjoyed by audiences around the world and more recently at the Ryman Auditorium in Nashville, the one-time home of the Grand Ole Opry.
“We’ve played with many of the big acts in Nashville and had lots of them perform here,” said mother Shirley during intermission at the family’s 11th anniversary show in the barn.
The dinner theatre offers a variety of matinee and evening entertainment through Oct. 1, with the Walters family back to wind up the season.
Another treat at this picturesque farm is the pre-show, down-home style country buffet that includes a local favourite, rolled ribs, and apple rhubarb crumble.
Fiddling around
Any good country music act has got to have a fiddler in the band.
That task goes to Darren Walters who plays 10 instruments and when he was just a kid taught his parents, Shirley (bass guitar and vocals) and Garry (now retired from drumming), how to play so they could join the band.
Back then, in the 1970s, Darren and his older brother Bradley (guitar and vocals) and sister Kimberly (vocals, keyboard, accordion) performed as the Walters Family Trio at barn dances, country fairs and local events.
It started when Grandpa George Matheson, Shirley’s dad and a fiddler, inspired the grandkids to learn to make music.
Now there’s a new grandkid in the band as Schyler, nine, Kimberly’s son, entertains by playing the fiddle and singing at some of the shows (and sells ice cream at intermission).
Just like Branson, fans arrive daily (except Sundays) by the busload to the 160-seat theatre for a large dose of nostalgia and crowd-pleasing music including the Orange Blossom Special and Coal Miner’s Daughter. 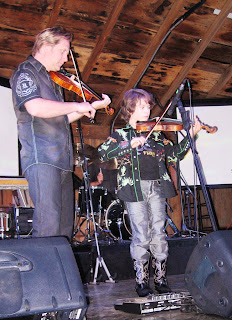 On the playbill
- Branson on the Road, July 11 to 23, (as the Toronto All-Star Big Band ends its performances tonight) features classic country, bluegrass, rockabilly and “hand-clappin’ gospel music” and comedy.
Co-host is Debbie Horton who was the only woman to have played lead guitar for Johnny Cash.
- Stringfever, July 25 to 30, a Canadian premiere consisting of three brothers and a cousin from Europe who perform popular hit songs on five-and-six stringed electric violins.
- Hank and My Honky Tonk Heroes, Aug. 1 to 6, stars Jason Petty from Nashville who re-creates many of Hank Williams’ greatest hits including Your Cheatin’ Heart backed by a four-piece band.
- The Queen of Bingo, Aug. 8 to 20, has two “zany guys playing two crazy gals” in their 50s wanting to add fun to their lives in the tradition of comedy sketches from the Carol Burnett show.
- Dixie Melody Boys, Aug. 22 to 27, a southern gospel quartet from North Carolina performing a high-energy show filled with traditional music.
- Ronnie Prophet, Aug. 29 to Sept. 3, features the legendary Canadian country music superstar and comedian in a “fast-moving family variety show.”
- Christmas with Mom and Dad, Sept. 5 to 17, is a Lancaster, Pennsylvania theatre production featuring the dancing, singing, comedy and routines of the Roaring 20s.
- The Walters Family Country Gospel, Sept. 19 to 24, will include favourites such as Amazing Grace and How Great Thou Art.
- The Walters Family Greatest Country Music Show, Sept. 26 to Oct. 1, features more “great music, fantastic fiddling, family harmonies and old-fashioned fun.”
If you go:
The Walters Dinner Theatre is at 836074 Hubbard Rd., RR 3, Bright, five minutes northwest of Highway 401 at Exit 250.
Tickets are $60 ($55 for the Walters shows) including the buffet for matinees and evening shows of two hours (with an intermission). Show tickets only are $50 ($40 for Walters).
Matinee lunch is at 12:30 p.m. with the show at 1:30 p.m., while the evening buffet is at 6:30 p.m. and show time is 7:30 p.m. www.walterstheatre.com; (519) 463-5559
-30-
Jim Fox can be reached at onetanktrips@hotmail.com
Posted by Jim Fox at 9:38 PM