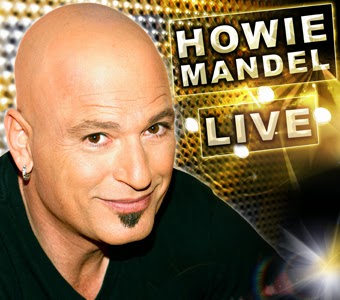 RAMA, ON – Casino Rama is pleased to announce the return of popular Canadian comedian and actor Howie Mandel this August:

Howie Mandel
Saturday, August 2
SHOWTIME: 9 PM, DOORS OPEN: 8 PM
Tickets are $40/$50/$65
Howie Mandel has remained a constant force in show business for over 30 years. Howie Mandel is also executive producer of many shows with his production company, ALEVY PRODUCTIONS, one of which is the TBS series Deal With It, which returned in March 2014 for a second season and is a hidden camera ambush show where unsuspecting members of the public are secretly dared to pull a prank on their unwitting companions with absolutely no time to prepare.


He also serves as one of the judges on NBC’s summer hit talent competition series America’s Got Talent alongside Heidi Klum, Mel B and Howard Stern. Previously, Howie received an Emmy nomination for “Outstanding Host For A Reality or Reality-Competition Program” for Deal or No Deal and a Daytime Emmy nomination for “Outstanding Game Show Host” for the syndicated version of the show.  more
Tickets go on-sale to the general public on Thursday, June 26 at 2 pm and will be available in-person at the Casino Rama Box Office, at all TicketMaster locations, by calling toll free 1-877-599-RAMA (7262) and online at www.casinorama.com. Ticket prices do not include applicable taxes or service charges.
PER SHOW TICKET LIMIT:  Ticket limit is 8 per customer per show.  Please adhere to published ticket limits.  Orders exceeding the ticket limit may be cancelled without notice by TicketMaster at its discretion.  This includes duplicate orders having the same billing address or credit card.
Patrons must be over 19 years of age with valid government issued photo identification and not self-excluded from any gaming facility in Ontario to attend concerts & events.
Operating since July 31, 1996, Casino Rama is Ontario's only First Nations commercial casino and has earned a reputation for presenting exclusive world-class sporting, entertainment & television events. The Casino offers a complete entertainment experience with over 2,500 slot machines, more than 110 gaming tables, 8 unique restaurants, a world-class 5,000 seat Entertainment Centre, and a 300-room all-suite, full-service hotel, featuring spa and health club facilities. Casino Rama is operated by Penn National Gaming, Inc.
- 30 -