KITCHENER-WATERLOO, Ontario --This year's Waterloo Air Show is very excited to have not one, but two World War Two heavy bomber B-17s attend the show.

While one will by flying in the show, the other will be on static display for guests to get up close, take tours, and speak to the crew. 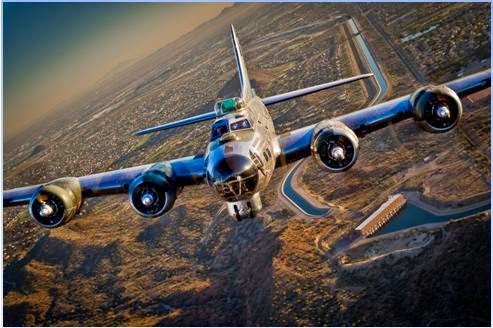 These aircraft are flying museums and represent and honour those who served many years ago.

For an experience of a lifetime, both aircraft will be selling public flights for $450 US per seat. The history alone is worth the expense.

It all happens at the Region of Waterloo International Airport June 28 & 29. www.waterlooairshow.com

June 14, 2014 - Yankee Lady, the meticulously restored World War II Boeing B-17 heavy bomber will be flying into the Waterloo Air Show and join other historic aircraft on June 28th and June 29th, 2014. The four-engine Flying Fortress, flagship of the Yankee Air Museum based at Willow Run Airport in Ypsilanti Michigan, will be available for tours and Flight Experience (FLEX) rides on both days.

“We’re really excited that the Yankee Lady will be offering Flight Experience rides,” exclaimed Loretta Lau-Lowerison, Executive Manager of the Waterloo Air Show. “It’s one thing to look up as all the fantastic planes fly overhead, but it’s a better thing to be on a Flying Fortress looking down at the enthusiastic people wishing they were on board that plane.  The fact that Yankee Lady is one of only nine Forts still flying puts an exclamation point on it.”

Lowerison, explained that 12,731 B-17s were built and the significance was its mission to bomb strategic targets in daylight precision raids.  Some airstrikes would have up to 1000 planes flying in waves over enemy industrial targets. This campaign, she says, crippled the enemy’s ability to make war and helped liberate Europe.

“We’re working hard to bring significant attractions to the Waterloo Air Show,” continued Lowerison.   “This appearance by Yankee Lady is a great addition to our impressive lineup featuring the Canadian Snowbirds.”

“Our Museum is equally proud of our partnership,” said Ray Hunter, Chairman of the Yankee Air Museum Board of Directors.  “As friends, we extend our reach and are able to offer the people of Ontario an advanced sensory study of World War II aviation through our FLEX rides.”

He added that the sights, sounds, smells and feelings on board a B-17 FLEX ride are unparalleled, providing an inkling of what WWII airmen endured.
“As a late G-model, our Flying Fortress was originally delivered to the U.S. Army Air Force on July 16, 1945 with natural metal finish,” said Norm Ellickson, B-17 Crew Chief.  “Recently, we washed off the grime that accumulates during the winter maintenance cycle.  Then we had the 19th Annual Bomber Buffing and about 300 people came out to help us.  This massive effort combining elbow grease with Mothers ™ Aluminum Polish gives the Lady’s skin a mirror-like shine.”

Ellickson said that the same attention to detail is given to the inside and mechanicals of the plane.  Since last October the Yankee Lady’s ground crew has worked hard completing the U.S.  Federal Aviation Administration certified inspection and comprehensive maintenance list of more than 500 items.

“Passenger safety is paramount, but it’s fundamentally important to look cool,” chuckled Ellickson, concluding, “at 69 years old any date the Yankee Lady has is a ‘hot date’ but she’s always ready.”

The B-17 Flying Fortress, Yankee Lady will arrive at the Waterloo Air Show the day before the event opens.  Ellickson says the crew will set up and be ready to offer tours and FLEX rides beginning Saturday morning June 28th.

“We’ll also be sure Yankee Lady will be available for ground tours,” said Dave Wright, Director of the YAM’s FLEX program.  “Hopefully she’ll be going out on numerous FLEX flights but will always return throughout daylight hours.  When she departs and returns it’s just part of the excitement to see her in action.”

For more information on the Waterloo Air Show, visit www.waterlooairshow.com

“To Honor All Veterans, Past and Present”

One of the last flying WWII B-17 bombers, “Sentimental Journey,” will be available for cockpit tours and public flights at the Region of Waterloo International Airport, June 27th – June 30th, 2014.

Mesa, Arizona -- The Boeing B-17 Flying Fortress was the primary bomber used by the American Air Force against Nazi Germany. Of the 12,731 B-17s originally built, less than ten remain in flying condition and only a very few fly regularly.  922 B-17s were lost in combat over Europe, with a loss of nearly 10,000 airmen.  The US 8th Air Force suffered the majority of these losses. Sentimental Journey proudly displays the markings of the 457th Bomb Group in their remembrance. Nose art of the Sentimental Journey features Betty Grable, the number-one pin-up girl of the World War II era. The aircraft is named after a song made popular by Doris Day in 1945.

Airplane enthusiasts, veterans, children and history buffs will love seeing this famous WWII aircraft. Sentimental Journey is maintained and operated as a flying museum and veterans’ memorial by the all-volunteer non-profit U.S.-based Commemorative Air Force. Built during 1943, this heavy bomber has been continuously flown, performing missions from military reconnaissance to drone "mother ship" during nuclear testing, as well as firefighting, before being retired. It was donated to the Arizona Wing in 1978, restored to full military specification, and has been touring North America since the early 1980s.

A thrilling flight inside this historic warbird starts at $425.00 per person. For flight reservations, the public can call 587-338-8817 or email b17rc@azcaf.org. Cockpit tours are only $5; ground viewing and photo opportunities are free to the visiting public from 9am - 5pm each day.

The Sentimental Journey is operated by the Arizona Airbase of the Commemorative Air Force located at Falcon Field in Mesa, Arizona. Organized in 1978, the CAF’s mission is to restore and preserve historically important aircraft and related memorabilia in order to educate the public about the significant contributions made by men and women in the defense of our nation.