Dublin's heneghan peng and Toronto's Kearns Mancini honoured for visionary design
December 1, 2016 - Peterborough, Ontario - The team of heneghan peng architects, in a joint venture with Kearns Mancini Architects, was presented with a prestigious Canadian Architect Award of Merit for the design of the new Canadian Canoe Museum at the magazine's annual awards gala in Toronto last night. 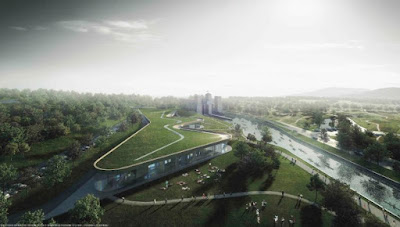 The Irish-Canadian team's design will be built to house the world's largest collection of canoes and kayaks at the Peterborough Lift Lock National Historic Site on the Trent-Severn Waterway. The team's elegant serpentine glass pavilion, graced by a rooftop garden, was chosen in January 2016 as part of the museum's two-stage competition - the first of which garnered close to 100 submissions from around the world.
The Canadian Architect awards, now in their 49th year, are the highest recognition for excellence at the design stage in the Canadian architectural sector. By focusing on commissioned but not yet completed projects, the program recognizes design ambition and supports an overall culture of design excellence. A total of ten awards were announced - projects selected from the nearly 150 professional submissions. The award-winning projects will be published in the December 2016 issue of Canadian Architect.
The jurors commented that the new Canadian Canoe Museum "provides two promontories to view the canal. One is the museum itself with its ample glazing and the other is its landscaped roof." They added: "It's very generous in that way, reinforcing the connection to the locks and to the waterway where the canoes have travelled."
"This national award is an incredible honour. It is humbling, and at the same time, befitting of a redevelopment project that is of national scope and significance," says Bill Morris, Chair, The Canadian Canoe Museum Board of Directors. "It's an exciting time, and we are moving forward with much momentum thanks to an incredible project team and our key partners in redevelopment, the City of Peterborough and Parks Canada."
The design has been envisioned with, and for, its community. Purpose-built for the collection, the new museum be the high-profile hub of the organization and the headquarters from which it reaches out across the country. The redevelopment project is currently in the detailed design phase.
"It's an honour to receive a Canadian Architect Award - particularly for a project that celebrates a Canadian icon, the canoe," says Roisin Heneghan, Director, heneghan peng architects.
"The strengths of this design are its simplicity and its sophistication," says Lisa Rochon, Chair of The Canadian Canoe Museum's Architect Selection Committee and Senior Fellow, Global Cities Institute, University of Toronto. "It breaks with ego-driven architecture to offer a gentle, organic space that poetically winds its way along the Trent-Severn. I can't wait to see this museum built. It's going to change the way we think about architecture, place making and the canoe - a true icon of design."
(30)
About the design team: heneghan peng architects, in a joint venture with Kearns Mancini Architects
Directors Roisin Heneghan and Shih-Fu Peng, of heneghan peng architects, in a joint venture with Toronto's Kearns Mancini Architects, publicly unveiled the inspiration for their competition-winning design for The Canadian Canoe Museum with stops in Toronto and Peterborough in May 2016. The firm, based in Dublin, Ireland, designed the new Palestinian Museum; the Grand Egyptian Museum, currently under construction in Giza at the foot of the pyramids; and the Giant's Causeway Visitor Center in Northern Ireland at the gateway to the UNESCO World Heritage Site. Kearns Mancini's work includes dynamic university buildings in Canada as well as the award-winning Fort York Visitor Centre, with Patkau Architects, that inserts a powerful Cor-ten steel and glass volume below Toronto's Gardiner Expressway.
About The Canadian Canoe Museum:
Founded just two decades ago, The Canadian Canoe Museum's importance to the nation is far beyond its years. On behalf of the citizens of Canada, the museum stewards the world's largest and most significant collection of canoes, kayaks and paddled watercraft. The craft, more than 600 in number, and their stories of national and international significance, have a pivotal role to play in our collective future. The museum is located in Peterborough, Ontario, and is set to move to the water's edge, physically connecting the craft in its collection to the waterways of the country. Please see canoemuseum.ca for further information.
Posted by Jim Fox at 12:24 PM