The Foxes meet the animal critters at Parc Omega, Quebec

You can talk to the animals, feed them and get up close like nowhere else at a drive-through safari park a short distance from Ottawa.
Parc Omega, just 45 minutes east in Montebello, Que., isn’t a zoo but a “natural life museum,” says Serge Lussier, zoologist and park ambassador.
“We’re here to discover Canadian animals, history and heritage,” says Lussier who was previously with the African Lion Safari in Cambridge.
Calling this sprawling 890-hectare park a “Canadian hidden treasure,” it’s the only one of its kind in Canada, he added.
We took a 90-minute, winding 15-kilometre road journey to discover animals living in the wild in their natural habitat. (There is also a safari bus, open vehicles and tour guides available.)
Animals at almost every turn kept coming up to Lussier’s vehicle to see what treats we had for them.


A feast on wheels
Several varieties of deer and elk feasted on carrots that can be bought at the Park House.
Be ready to dodge lots of slobber as the animals often put their heads inside to see what’s on the menu.
Along the way, there are forests, lakes, prairies and hills where you can also see wild turkeys, alpine ibex (a species of wild goats) and bison living in “semi-captivity.”
There are valleys with wolves, bears, Arctic foxes, caribou, coyotes and wild boars and muskox making their homes.
Don’t be surprised to see a herd of buffalo and moose lumbering along the roadway along with wapitis (large deer) and wild goats.
Park the vehicle and explore on foot along three walking trails and at playgrounds and picnic areas where the deer will join in.
There’s also a footbridge overlooking the bears and wolves for a closer view.
Open daily year-round, visitors often snowshoe and ski amongst the deer in the winter.
The First Nations Trail offers a “rendezvous with history” along a one-kilometre hike around Trout Lake where you can learn about the 11 aboriginal nations in Quebec, Lussier said.
“A totem pole of the Seven Fires evokes a prophecy that guides us towards a world of peace and reconciliation,” he added.
There are inuksuk stone landmarks to illustrate the close relationship with nature and legends and a symbolic thunderbird.
This is the area to see beaver, Canada geese, bald eagles, turtles, fish, ducks and great blue herons.
In the park is a trading post with illustrations and artifacts, the Old Farm from 1847 and its miniature village with donkeys, ponies, rabbits and other animals.
Seasonally, there’s a restaurant at the Park House with a panoramic view and a maple sugar shack.
Spend the night in rustic accommodations with access to an observation lookout and bridge to watch the animals from above.
Offered are tents, a house on stilts, teepees and a log cabin from $100 a night, along with a community building to prepare meals and have showers.
The park has two FM radios stations that provide guidance and direction, in English and French. 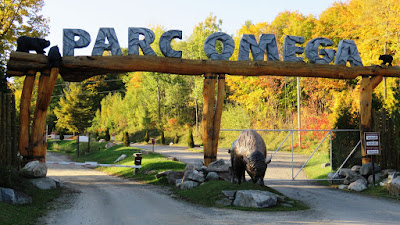 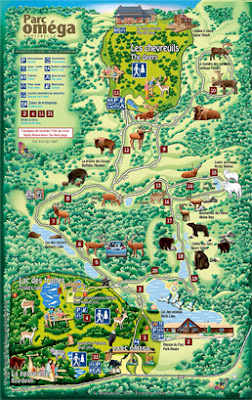 Bello the lab
Our animal adventures continued by meeting Bello, a “Canine Ambassador,” at Fairmont Le Chateau Montebello.
A favourite of guests at this luxury rustic property, called the “world’s largest log cabin” along the Ottawa River, is Bello, the black lab, one of 16 guests’ best friends at Fairmont properties.
These resident dogs are “gentle, affectionate and can often understand matters in a way no other human can,” said Mike Taylor, Fairmont public relations director.
“Their job – as official members of the hotels’ Guest Services teams – is to provide companionship, security and that special wisdom that only a pet can provide,” he added.
Guests can take the dogs for walks, vigorous hikes or rest in the lobby lounge beside Montebello’s massive fireplace for a soothing scratch behind the ears. fairmont.com/promotions/canineambassadors