Out for a spin along the Great Lakes Waterfront Trail

Happy trails to you!
It started in 1995 as a trail spanning 275 kilometres along Lake Ontario between Hamilton and Trenton.
Today, the multi-use Great Lakes Waterfront Trail stretches 2,100 kilometres and continues to grow to the delight of bikers and hikers.
What’s more, it has just been recognized as a “Trail of Distinction” by the Ontario Ministry of Tourism, Culture and Sport.
An expansion last year connected Lambton County and Kettle and Stony Point First Nation to the trail.
This year it added 380 kilometres along the Lake Huron North Channel between Sault Ste. Marie and Sudbury, so the trail now meets Lake Superior.
Next year, another 650 kilometres will be added by expanding into Manitoulin Island, Huron,
Bruce and Grey counties.
This will close the gap between the North Channel and Southern Ontario and result in a continuous signed route from Sault Ste. Marie to the Quebec Border. 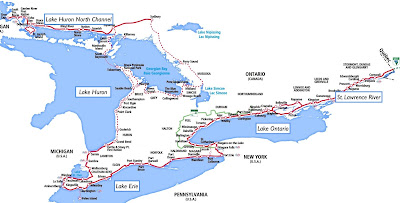 The waterfront trail and others of distinction are “legacy routes that celebrate Ontario’s iconic landscapes and passion for the outdoors,” said Marlaine Koehler, executive director of the Waterfront Regeneration Trust.
The long-term vision shared by the trust and its community partners is to “create a trail that embraces all of Canada’s Great Lakes and the St. Lawrence River,” she added.
The trail idea was originally launched by former Toronto mayor and cabinet minister David Crombie.
Calling it one of the province’s “most distinct trails,” Eleanor McMahon, Minister of Tourism, Culture and Sport, said it has “unique wetlands, forests and beaches that connect to vibrant communities.
“It’s an incredible route of discovery through Ontario’s rich natural heritage,” she added, noting it is an Ontario 150th birthday legacy initiative.
Others to have received this honour include the Greenbelt Route, Trans Canada Trail Ontario, Bruce Trail and the Ontario Federation of Snowmobile Clubs Trans Ontario Provincial Trails.
The waterfront trail is a combination of paths, neighbourhood streets, rural roads and highways.
Major branches include the Niagara River Recreational Trail and the St. Lawrence Bikeway.
It is largely paved and welcomes all types of non-motorized recreation users, with portions designated as the Trans Canada Trail.

Jim Fox can be reached at onetanktrips@hotmail.com
For more One-Tank Trips: http://1tanktrips.blogspot.ca
Posted by Jim Fox at 11:32 AM