Everybody Get Up! Robin Thicke to perform at Casino Rama 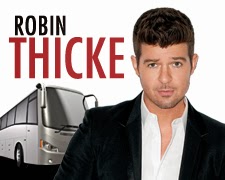 RAMA, ON – Casino Rama is thrilled to welcome Robin Thicke to the renowned Entertainment Centre stage in the New Year.

Thicke's hit "Blurred Lines" has been widely acknowledged to have been the hit worldwide, topping the charts in the United States, Canada, Australia,New Zealand, Ireland, Spain, Germany,
the Netherlands, Poland and the UnitedKingdom, as well as the top ten in Belgium, Denmark, Lithuania, France, Iceland, Italy, Portugal and Switzerland.

Thicke has established himself as one of the most respected singer-songwriters in soul and R&B music today having released his sixth studio album Blurred Lines this past July.

Robin Thicke:
Robin Alan Thicke is an American-Canadian singer-songwriter, musician and actor.
He is the son of actor Alan Thicke and actress Gloria Loring. Thicke has worked
with popular artists such as Christina Aguilera, Nicki Minaj, Jennifer Hudson,
Usher, and Mary J. Blige. He has also been acknowledged for his work on popular
albums such as Usher's Confessions and Lil Wayne's Tha Carter III. Thicke was a
singer, mentor, and judge on the ABC show Duets.

In March, 2013 Thicke released "Blurred Lines" featuring T.I. and Pharrell as
the lead single to his sixth studio album, also titled Blurred Lines. The song
has been a worldwide hit, has peaked at number one on the Billboard Hot 100, and
has also reached number one in 13 more countries including the United States and
United Kingdom, where Blurred Lines became only the 137th record in history to
surpass the one million sales mark.

Ticket Information:
Tickets are on sale to the public in-person at the Casino Rama Box Office, at all TicketMaster
locations, by calling toll free 1-877-599-RAMA (7262) and online at
www.casinorama.com<http://www.casinorama.com/>. Ticket prices do not include
applicable taxes or service charges.

Need a ride to the home of Big Time Excitement for the show? For the first time
Casino Rama is offering dedicated, round-trip bus packages with service from the
Bay/Dundas terminal station in downtown Toronto. Beginning at only $70 per
person, bus packages will include round-trip transportation and one (1) ticket
to the concert.  Packages must be purchased through the Casino by calling toll
free 1-800-832-PLAY (7529).

PER SHOW TICKET LIMIT:  Ticket limit is 8 per customer per show.  Please adhere
to published ticket limits.  Orders exceeding the ticket limit may be cancelled
without notice by TicketMaster at its discretion.  This includes duplicate
orders having the same billing address or credit card.

Patrons must be over 19 years of age with valid government issued photo
identification and not self-excluded from any gaming facility in Ontario to
attend concerts & events.