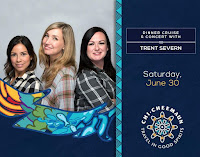 Stratford, ON (June 10, 2018) – Canadian folk trio Trent Severn is wrapping up their Ontario tour with a splendid sunset dinner cruise aboard the MS Chi-Cheemaun in Tobermory, Ontario on Saturday, June 30, 2018 from 8:00 pm to midnight.

The trio has been performing annually aboard the MS Chi-Cheemaun since 2015, entertaining guests with their gorgeous harmonies, distinct sound and original songs that are pure & proudly Canadiana.

Guests will board the ferry in Tobermory where they will enjoy fine dining and the splendid view of the setting sun over Georgian Bay during the regular crossing from Tobermory to South Baymouth on Manitoulin Island. The MS Chi-Cheemaun makes the 40 km. trip in about one hour and 45 minutes. After dinner, Trent Severn will entertain the guests on the return trip to Tobermory. Translated, “chi-cheemaun” means “big canoe” in Ojibwa. In 2015, the ship underwent the first phase of a major makeover with the installation of a First Nations-themed wrap-around vinyl decal. 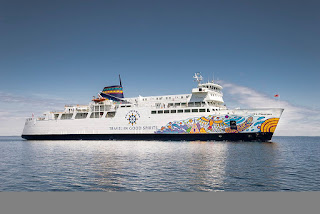 Based in Stratford, Ontario, Trent Severn showcases the talents of Emm Gryner (bass, vocals), Dayna Manning (vocals, guitar, banjo) and Lindsay Schindler (fiddle, vocals). Two-time Canadian Folk Music Award nominees, Trent Severn’s individual band members have four Juno Award nominations among them.
The folk trio’s trademark vocal blend and stripped-down approach to modern life in Canada has landed them hundreds of festival and series appearances; a feature article in MacLean’s Magazine in 2013 and the Harrowsmith Almanac in 2017; national television performances; a CBC Radio One live recording in 2014; and the honour of performing an original arrangement of “O Canada” during a Canada Day flag raising on Parliament Hill.

Trent Severn feels very fortunate to count retired Canadian astronaut Chris Hadfield among their fans and is the first band ever to receive a call to a performance from outer space. In 2013, Colonel Hadfield called in a song request from the International Space Station to Trent Severn’s live show in Goderich, Ontario. They were also the first band to back up Colonel Hadfield on his hit cover of David Bowie's “Space Oddity” in space and on earth.
Trent Severn’s music has taken the band on unexpected adventures, including watching the Canadian Forces Snowbirds demonstration team fly to their song “Freedom” in 2015. The trio has also collaborated with inventor William Lishman and the award-winning Canadian indie band The Rheostatics.

With songs about trains, small-town charms, Canadian personalities and even a maple syrup heist, Trent Severn shares stories about the goodness and beauty of our nation. Since the release of their self-titled debut album in 2012, the folk trio has won over fans from coast to coast. Their second CD pays homage to their home province of Ontario, while their third recording, entitled Portage, was recently released.