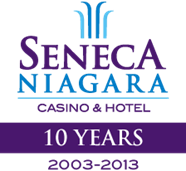 NIAGARA FALLS AND SALAMANCA, N.Y. – Something for everyone is in store for the remainder of Seneca Casinos’ winter entertainment lineup in 2014. Just announced for Seneca Niagara Events Center is longtime talk show host and comedian Joy Behar on February 15 and country superstar Trace Adkins on March 22.

Seneca Allegany Events Center announces a value-priced general admission performance by The Machine, a globally-touring Pink Floyd tribute act, for President’s Day weekend on February 16 as well as country singer-songwriter Travis Tritt on March 8. Three new acts also are booked for the Bear’s Den Showroom in Niagara Falls, including Austrian-Italian heartthrob Patrizio Buanne on Valentine’s Day.
Joy Behar, best known for her 16 years as a co-host on the ABC daytime talk show “The View,” comes to Seneca Niagara Events Center on Saturday, Feb. 15 for an evening of in-your-face standup comedy. Tickets for the 8 p.m. performance start at $25 and are on sale now. Behar earned a Daytime Emmy Award nomination for Outstanding Talk Show Host every year between 1998 and 2011, and won the award in 2009. In 2010, “The Joy Behar Show” on HLN earned a nomination from the GLAAD Media Awards for Outstanding Talk Show Episode. Audience members at Seneca Niagara Events Center can expect to hear several references to Behar’s Italian-American family culture during her routine.

Closing out winter entertainment on Saturday, Mar. 22 is country superstar Trace Adkins at Seneca Niagara Events Center. Tickets for the 8 p.m. show start at $45 and go on sale Monday, Dec. 30 at noon. The unmistakable baritone is known for hits such as “Honky Tonk Badonkadonk,” “This Ain’t No Love Song” and “You’re Gonna Miss This.” He also has made dozens of appearances on television, most recently winning the 2013 season of NBC’s “The Celebrity Apprentice.” This year, he released two albums: “Love Will…,” featuring romantic ballads and musical collaborations, and; “The King’s Gift,” a Christmas album.

A value-priced $15 general admission show at Seneca Allegany Events Center in Salamanca on President Day’s weekend will add to the fun for thousands of people enjoying a ski weekend in nearby Ellicottville. The Machine, a worldwide-touring Pink Floyd tribute act that has performed for more than 25 years, will take the stage at a special 7 p.m. start time on Sunday, Feb. 16. The show includes elaborate stage displays and features a diverse mix of Pink Floyd’s extensive 14-album repertoire.

Coming to Seneca Allegany Events Center on Saturday, Mar. 8 is country superstar Travis Tritt. Tickets for the 7 p.m. show start at $25 and go on sale Wednesday, Jan. 8. Since his 1990 debut, Tritt has sold more than 25 million albums while winning two Grammy Awards and four Country Music Association Awards. Fifteen of Tritt’s songs have reached the Top 10 on the country charts and another five made it all the way to No. 1, including “Help Me Hold On,” “Anymore,” “Can I Trust You with My Heart,” “Foolish Pride” and “Best of Intentions.” Tritt released his 11th studio album, “The Calm After…,” this past July.

Delivering a performance perfectly suited for Valentine’s Day and the intimate 440-seat Bear’s Den Showroom at Seneca Niagara Casino & Hotel is heartthrob crooner Patrizio Buanne. Born to Italian parents in Austria, Buanne spent his childhood growing up between Vienna and Naples, and speaks fluently in six languages. The baritone’s performance in Niagara Falls comes on the same day as the worldwide release of his latest album. Buanne’s 8 p.m. show on Friday, Feb. 14 will include a plethora of romantic songs, primarily in Italian and English. Tickets start at $35 and go on sale Friday, Dec. 27 at noon.

The Fabulous Thunderbirds return to the Bear’s Den Showroom on Friday, Feb. 28 at 8 p.m. for the first time since a sold-out July 2012 performance. Tickets start at $35 and go on sale Friday, Jan. 3 at noon. The blues-rock band has toured extensively since forming in 1974 and reached its peak success on the Billboard charts in 1986 behind the hits “Tuff Enuff” and “Wrap It Up.” Their 13th studio album, “On the Verge,” was released earlier this year.

Booked for a late winter performance on Saturday, Mar. 15 at 8 p.m. in the Bear’s Den Showroom is three-time Grammy Award–winning blues singer and guitarist Keb’ Mo’. Tickets start at $60 and are on sale now. Keb’ Mo’ is known for his Delta blues style of music, which incorporates instruments such as the slide guitar, harmonica and banjo. His latest record, “The Reflection,” earned a Grammy Award nomination for Best Blues Album in 2012.

Tickets for all shows are available at Seneca Casino box offices, Ticketmaster.com, all Ticketmaster locations or by phone at 800-745-3000. Starting ticket prices and on-sale dates are below in the full schedule of confirmed upcoming entertainment at Seneca Casinos:

About Seneca Allegany Casino & Hotel
Seneca Allegany Casino & Hotel is nestled at the foot of the majestic Allegheny Mountains along the New York/Pennsylvania border and is located off exit 20 of the Interstate 86 near U.S. Route 219. The property is open 24 hours a day, seven days a week and 365 days a year. Guests can enjoy 2,000 slot machines and 33 table games, seven dining locations, live entertainment and a AAA Four Diamond Award-winning hotel with 413 deluxe rooms and suites, a spa and salon, fitness center and indoor pool. Please visit www.SenecaCasinos.com for more information.