TICKETS FOR DISNEY ON ICE PRESENTS DARE TO DREAM 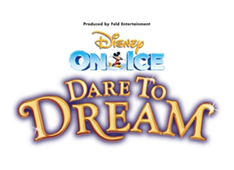 TORONTO, ON — This holiday season, Disney On Ice presents Dare to Dream is bringing Disney’s princess stories and most beloved fairytales to the ice in a sensational live production coming to Toronto.

This ice spectacular featuring scenes from Tangled, Snow White and the Seven Dwarfs, Cinderella, and The Princess and the Frog, visits Toronto from December 18-27/15 for 17 performances at Rogers Centre.  Tickets are on now sale.

Laugh at Disney's hilarious hair-raising escapade, Tangled, as Rapunzel; her unlikely companion, Flynn; and Maximus, the Captain of the Guard's determined horse; embark on an uproarious journey that takes adventure to new lengths.


Travel to the enchanted forest with Snow White and the Seven Dwarfs as Snow White escapes from the Evil Queen in her search for her one true love. Watch as fanciful dreams become reality as Cinderella meets her Prince Charming, with a glass slipper fit for an unforgettable fantasy come true.

And boogie to the beat of the bayou in a magical, musical journey that celebrates the story of The Princess and the Frog with Princess Tiana and Prince Naveen. All your favourite princesses take to the ice in a spectacular finale at the ultimate Disney Princess event of a lifetime!  Experience the beauty, sparkle, and spirit when Disney On Ice presents Dare to Dream comes to town.
Tickets for Disney On Ice are available at all Ticketmaster outlets, Rogers Centre Box Office, Ticketmaster.ca, or by phone at 1-855-985-5000.