Children are being encouraged to “sneak a peek inside Santa’s workshop to find out what the elves have been working on all year.”
It takes place at Santa’s Festival Village, inside the Ingersoll Cheese and Agricultural Museum, in the town southwest of Woodstock.
Santa, Mrs. Claus and the elves have taken up residence and are receiving visitors on Fridays and Saturdays from now through Dec. 12.
It began Friday night at the kickoff of the Festival of Winter Lights, with the village and museum the starting point for a “drive-through/walk-through” tour of more than 300 lights in five parks around town, said curator Scott Gillies.
“Santa’s elves have been busy transforming the museum into his workshop,” he added.
This free admission event includes a visit and photos with Santa, rides on the Red Nosed Wagon Express, enjoying festive entertainment and discovering seasonal crafts.


While there, there’s an opportunity to tour the other buildings and check out Ingersoll’s big cheese.
It’s a wheel of cheese weighing 3,311 kilograms (7,300 pounds) that was created in 1866 at the James Harris Cheese Co.
It was the work of three local cheese factories as part of a promotional campaign to market Oxford County cheddar cheese to England, France and the United States.
On the site are seven buildings, including a replica 19th-century cheese factory, the Sherbrooke barn, a blacksmith shop and the Ingersoll Community Museum.
The cheese factory building was the first structure to be erected in 1977 to commemorate the importance of the dairy and cheese industry in and around Ingersoll. 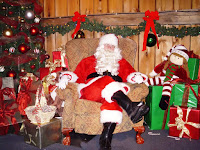 It was the cheese industry that established the town as a thriving commercial and industrial base during the latter half of the 19th century.

The other buildings have a wide selection of early farm implements and there’s a blacksmith shop with a working forge.

The Community Museum displays artifacts and memorabilia related to household, business and community history and includes a 150-year-old barn loom and a bicycle that travelled around the world.
There’s also the Sports Hall of Fame, exhibiting photos, memorabilia and awards from many of Ingersoll’s local athletes including Olympic diver Ken Armstrong and NHL linesman George Hayes.
It’s also the new home for the Oxford County Museum School that was relocated from Burgessville after 38 years of operation with its single classroom and displays.
The cheese museum is open during the extended Santa hours and kids can have their photo taken with Annie the cow.
The Ingersoll Cheese & Agricultural Museum is at 290 Harris St., with Santa’s Festival Village hours on Fridays from 6 p.m. to 9 p.m. and Saturdays, 5 p.m. to 9 p.m.
For more details: ingersoll.ca; (519) 485-5510

Christmas market
The Toronto Christmas Market is back for its sixth year and has been extended by one week from now through Dec. 20.
It takes place at the Distillery Historic District and “recreates the romance and magic of traditional European Christmas markets dating back to the early 1400s,” organizers say.
There is “family friendly” entertainment with 320 stage performances, a Ferris wheel, 80 boutiques, galleries and restaurants, and a huge white spruce Christmas tree decorated with more than 18,000 lights.
Along with an outdoor heated beer tent are wine gardens to try a glass of traditional Gluhwein (mulled wine), an old European tradition, or a hot toddy.
Visitors can savour an “eclectic mix” of traditional European street foods and Canadian delicacies, sweets and treats.
With more than half-a-million attending the previous three-week event, organizers are instituting an admission charge on weekends to help with crowd control.
A fee of $5 a person will be charged on Saturdays and Sundays but it will remain free to visit on Tuesdays through Fridays (closed Mondays).
Children to age 12 will be admitted free before 2 p.m. this weekend.
Market hours are Tuesday to Thursday, noon to 9 p.m.; Friday, noon to 10 p.m.; Saturday, 10 a.m. to 10 p.m.; and Sunday, 10 a.m. to 9 p.m. Details: TorontoChristmasMarket.com