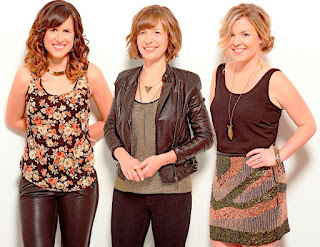 What keeps the three Lovelies making great music together is their uncanny vocal compatibility and unshakeable friendships which supports each member contributing to the song-writing in distinct ways.

Since getting together in 2006, the Good Lovelies profile has steadily grown with sold-out performances, opening for Stuart Mclean’s Vinyl Cafe show and an impressive track record of award-recognized albums. Their 2010 self-titled album won a Juno Award for Roots & Traditional Album of the Year (Group); Let the Rain Fall (2011) was nominated for a Juno Award; and Live at The Revolution (2012) scored big at the Canadian Folk Music Awards. Now, they're looking to be similarly successful with their new CD entitled Burn the Plan.

The new recording features a whole lot of living, loving and letting go. Caroline Brooks feels time has brought the group to a new maturity. While most tracks stick with relationship themes, they are also a bit darker and more introspective than on their previous CDs. There are also nice touches of banjo accompaniment, hints of jazz, classic pop and folk ballads on this new recording.

During the four-year recording hiatus between 2012 and 2016, The Good Lovelies expanded their touring schedule that introduced them to new audiences in the United States, Australia, the United Kingdom and Europe.

Revival House, formerly the Church Restaurant, is one of Stratford’s most iconic buildings. A former Baptist church-turned-fine dining restaurant, Revival House is co-owned and operated by Stratford natives Rob and Candice Wigan. The 1,676-square-metre property was gutted last spring and its majestic interior transformed into a “smart casual” restaurant and lounge. Renowned London chef Byron Hallett runs the expansive kitchen and embrace the local farm to table concept.