Ontario is blessed with about 250,000 lakes and more than 100,000 kilometres of rivers ready to explore by water and land.
This abundance of fresh water shaped our history and plays a key role in providing unlimited tourism opportunities today.
These range from scenic day trips, paddling up a lazy river and travel by waterways and canals.
Of particular note is the natural heritage and spectacular beauty of the Trent-Severn Waterway and the Rideau Canal.
Both are National Historic Sites and protected and maintained by Parks Canada.
Visitors can explore by boat or by road, stopping off to watch the parade of vessels passing through the numerous locks crisscrossing the countryside.
Many of the lock locations have picnic tables, barbecues and washroom facilities, interpretive displays and plenty of parking for a close-up view of the many boaters rising and falling to continue their journey.
Parks Canada workers can be seen scurrying in circles, cranking open and closing the lock’s massive gates using hand winches.
Trent-Severn, an engineering marvel

Historians learned through Native rock carvings that groups of people have travelled the Trent-Severn natural waterway formed by the patchwork quilt of lakes since at least 9,000 BC.
It became an important transportation and migration route, while the dream of building this inland navigation route of 386 kilometres from the Bay of Quinte on Lake Ontario to Georgian Bay took 87 years to become a reality.
The first lock was built in 1833 in the Kawarthas at Bobcaygeon as settlers were anxious for a waterway to provide access to lucrative southern markets.
Work on the future waterway continued off and on until 1878 when Sir John A. MacDonald’s newly elected government decided to complete it.
Locks were built at Burleigh Falls, Lovesick, Buckhorn and Fenelon Falls, connecting the Kawartha lakes but navigation elsewhere didn’t happen until 1920.
Boaters pass by lush farmland, marshes teeming with flora and fauna and waterfalls in rocky gorges.
Travelling north, at the start of the Kawarthas is Rice Lake while at Kirkfield the canal is carved through limestone to give access to lakes Simcoe and Couchiching at Orillia.
Kirkfield’s lift lock raises and lowers boats 14.9 metres, second only to the famous Peterborough Lift Lock, giving boaters a 19.8-metre ride that’s called the “highest hydraulic life lock in the world.”
Continuing northwesterly, the waterway travels along the Severn River to Georgian Bay where boaters travel through the Big Chute Marine Railway that connects Gloucester Pool and the Upper Severn River.
It’s a sight to be seen as boats are loaded onto a huge, open carriage and the marine railway transports them over the road to join the water downstream away from the rapids. 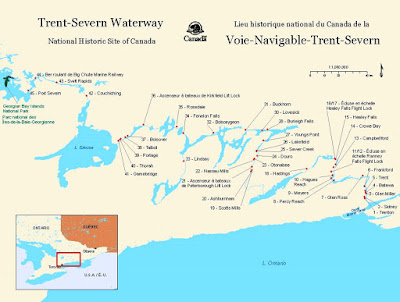 The journey by boat from one end to the other takes about a week through 36 conventional locks, two sets of flight locks, two of the highest hydraulic locks and the marine railway. pc.gc.ca/eng/lhn-nhs/on/trentsevern/index.aspx; 1-888-773-8888

Not just for skaters
The Rideau Canal is often best known as the world’s longest skating rink but at this time of year, it’s a water world.
The so-called “visitor’s paradise” has many historic lock stations along its 202 kilometres stretching from Kingston on Lake Ontario to Ottawa.
As well as being a National Historic Site of Canada, it’s a Canadian Heritage River and a UNESCO World Heritage Site with a series of lakes and rivers connected by canals.
Another claim is that it’s the oldest continuously operated canal in North America and the locks are operated today much as they were when first opened in 1832.
To get the full effect of the Rideau is to go by water but it also makes for a great driving trip.
Many scenic roads along the canal wind their way through towns and villages of Eastern Ontario and the region’s four distinct natural landscapes.
The Trent-Severn and Rideau are open for boaters from mid-May to Thanksgiving Day in October.
At this time of year (until Sept. 5), hours are Monday to Thursday, 9 a.m. to 6 p.m.; and Friday to Sunday (and holiday Mondays), 9 a.m. to 7 p.m. pc.gc.ca/eng/lhn-nhs/on/rideau/index.aspx; 1-888-773-8888