Boots and Hearts headliner Brantley Gilbert, along with Brett Eldredge and Dan + Shay 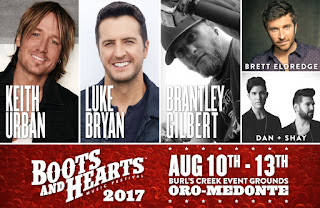 "We are very excited to have Brantley Gilbert headlining Boots and Hearts for the first time," said Alex Patton, Talent Buyer, Fource Entertainment. "This summer fans can look forward to never seen before performances at Boots and Hearts including Keith Urban, Brantley Gilbert, and Brett Eldredge, all in addition to fan favourites from past years, Luke Bryan and Dan + Shay.
"We are adding many more incredible acts to the line-up that we know the Boots and Hearts crowd will go crazy for. This year’s line-up is definitely one for the books and we can’t wait to share more with our fans in the coming weeks!"

Stay tuned for further programming updates, including on-site activations and food offerings. Boots and Hearts 2017 tickets are currently on-sale at Tier 2 pricing for $249.99 and VIP for $599.99. Full list of ticket offerings are available here.
ABOUT BRANTLEY GILBERT
Brantley Gilbert will release his fourth studio album THE DEVIL DON’T SLEEP (The Valory Music Co.) on January 27. The songwriter/rocker chronicles this chapter of his life with sixteen new songs including lead single “The Weekend.” The project also features ten previously-unreleased tracks on the deluxe version. THE DEVIL DON’T SLEEP follows back-to-back platinum-selling albums: American Music Award winning JUST AS I AM and HALFWAY TO HEAVEN. The iHeartRadio Music Awards Renegade Award recipient has racked up six No. 1 singles – including 3X Platinum “Bottoms Up,” “One Hell Of An Amen” and “Small Town Throwdown” – impressive albums sales, multiple award show nominations from the CMA, ACM, ACA, ACC, Billboard Music Awards and CMT Music Awards, in addition to being named 2013 ACM Awards New Male Vocalist of the Year. Gilbert will headline his third consecutive tour this fall as he hits the road for THE DEVIL DON’T SLEEP TOUR. For tour dates and more visit, BrantleyGilbert.com.

ABOUT REPUBLIC LIVE
Republic Live is a Canadian-owned live entertainment company founded in 2011, with offices in Toronto, Ontario and Nashville, Tennessee.  Republic Live takes pride in creating world-class, fan-centric, time of your life experiences. The company works with a multitude of partners on a variety of platforms to create unique experiences for fans, artists, industry partners and sponsors. Republic Live’s two flagship events are Boots and Hearts Music Festival, Canada’s largest camping and country music festival and WayHome Music and Arts Festival, a kaleidoscope of sound, smell, colour, and spectacle.