Stratford, ON – String Bone Presents! Samantha Martin & Delta Sugar in concert January 27, 2017 at 8:00 pm at Stratford’s Revival House. Whoa! Here's a voice that comes along once in a blue moon. Based out of Toronto, roots ‘n roll Samantha Martin is a five-time Maple Blues Award nominee and in 2016 she was nominated for “Best Female Vocalist” at the Maple Blues Awards presented by the Toronto Blues Society.

As a vocalist, Martin’s gospel-tinged but equally nostalgic southern soul sound is reminiscent of Marion Williams, Mavis Staples, Etta James, Tina Turner, Bettye LaVette, Lucinda Williams and, perhaps most closely, Bonnie Bramlett. As a songwriter, her lyrics suggest an old soul with wisdom beyond her years.

Samantha Martin has been building a roots/blues/gospel sound and team with Delta Sugar since 2014. Although the concert focus will be on Martin as the front woman, this band really is a team effort and powerful blend. Accompanying Martin's powerful lead vocals and acoustic guitar are Sherie Marshall and Stacie Tabb (vocal harmonies) and Mikey McCallum (electric guitar). Together they pack more punch than a stage full of amps and fearsome guitarists.


The band has performed throughout southern Ontario, playing on the Canadian festival circuit during the summer months, and eventually finding their way to Europe, where they performed a series of concerts in Bremen, Germany as part of Women in e(motion) festival.

A live EP, entitled Mississippi Sun, was cut in January 2014. Hunkering down in the studio in September 2014 with Brooklyn-based producer Rench (of bluegrass/rap group Gangstagrass), Samantha Martin and Delta Sugar recorded their masterful CD Send the Nightingale. Released in February 2015, the album is a quantum leap for both Martin and her band. 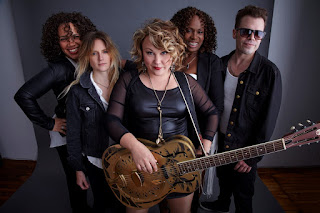 “Samantha Martin and Delta Sugar are one of the most powerful new artists to emerge on the roots music scene in many a year,” says Rob Bowman, Grammy Award winning author of Soulsville U.S.A.: The Story of Stax Records. “The vocal blend Delta Sugar produces is pure, unadulterated gospel-tinged, neuron-tingling magic where the sum is even richer than the already soul-melting parts, complemented by guitarist Mikey McCallum’s Delta-inspired and mystery-inflected guitar lines.”
Tickets for the Live at Revival House concert series are available at www.stringbonepresents.com. The website also contains information about dinner reservations at Revival House and accommodation at Foster’s Inn.

Revival House is one of Stratford’s most iconic buildings. A former Baptist church-turned-fine dining restaurant, Revival House is co-owned and operated by Stratford native Rob Wigan and his wife Candice Wigan. The 1,676-square-metre property was gutted in the spring of 2014 and its majestic interior transformed into a “smart casual” restaurant and lounge with an expansive kitchen that embraces the local farm to table concept. In 2016, Revival House was featured in enRoute, Air Canada’s inflight travel magazine.