Stratford worth a winter visit

Stratford, ON (February 6, 2017) – String Bone Presents! critically-acclaimed singer, songwriter and producer Alysha Brilla in concert February 24, 2017 at 8:00 pm at Stratford’s Revival House. Opening the show will be Juno-nominated Andrew McPherson (Eccodeck). Prior to the concert Stratford’s Deejay Edward Bear (aka Shane Hartman) will be spinning some groovy beats.

Alysha Brilla's route to success has taken her from southwestern Ontario through to Los Angeles and the Juno Awards. Her music reflects the diversity of her upbringing.

Born in Mississauga to an Indo-Tanzanian immigrant father and a European-Canadian mother, Alysha regularly performs in Toronto and lives in Kitchener, a town where she feels comfortable in and where there is a plethora of interesting musicians to jam with.

A graduate of Humber College's jazz program, Alysha Brilla plays guitar, piano and djembe.
Vocally, she dabbles in Amy Winehouse retro soul-jazz with moments of calypso, rumba and acoustic balladry. Her new music draws on the influences of her unique ethnic background. An ancestral journey to her father’s homeland in 2015 delivered inspiration for ten new songs which blend Indian and East African sounds with a contemporary aesthetic.

Brilla’s music has been featured on major network television shows, including King and Degrassi” The Next Generation, and her songs receive generous airplay on CBC Radio One and CBC Radio 2.

No stranger to touring, Alysha Brilla has performed across Canada and the United States under her own name and within various bands and ensembles, including an opportunity to open for Canadian Juno Award winner k-os (aka Kevin Brereton). She has played at the famed Montreal International Jazz Festival, Mariposa Folk Festival, L.A. Angel City Music Festival, Kitchener Blues Festival, Stratford Blues Festival, as well as the Oakville Jazz Festival and Summerfolk Festival.

Andrew McPherson is a Canadian producer, remixer and songwriter. He is stepping away from the studio and up to the mic with his 4th solo release, entitled Bardo, a potent mix of rock, folk, ambient and prog. Putting his twice Juno-nominated world music project Eccodek on hold, Andrew has crafted 11 new songs that place life neatly and unflatteringly under the lens with his commanding baritone voice. He has collaborated with an inspiring range of artists, including Vieux Farka Touré, Delhi 2 Dublin, Stephen Fearing, Kiran Ahluwalia, Dub Colossus, Philosopher Kings, Jane Siberry, Rant Maggie Rant, Deva Premal, MC Yogi, Natalie MacMaster and many more. 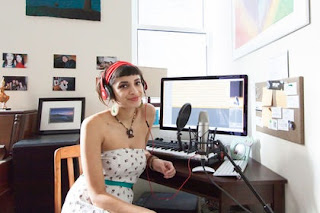 Spinning tunes during dinner and prior to the concert will be Deejay Edward Bear (aka Shane Hartman) who is a Stratford, Ontario based soul, funk & reggae DJ, as well as a member in good standing with the Revival Vinyl Society Crew and host of the radio show, Soul Shake Down Party!!!, which broadcasts Wednesday evenings at 7:00 pm on svpradio.com. Well known as a 45 specialist and mastermind behind some of the city's only vintage vinyl parties since 2014, Deejay Edward Bear can usually be found exploring crates inside many a record shop, thrift store, garage sale and recycling bin.

Revival House offers a feature dinner-concert prix fix menu (add $34.99 and pay Revival House directly on the night of the show). Once you've purchased your online concert tickets, call 519-273-3424 to reserve your table at Revival House. Out-of-town guests, check out Foster’s Inn bed-and-breakfast special for two by calling 519-271-1119. The inn is a comfortable walking distance to Revival House.
Revival House is one of Stratford’s most iconic buildings. A former Baptist church-turned-fine dining restaurant, Revival House is co-owned and operated by Stratford native Rob Wigan and his wife Candice Wigan. The 1,676-square-metre property was gutted in the spring of 2014 and its majestic interior transformed into a “smart casual” restaurant and lounge with an expansive kitchen that embraces the local farm to table concept. In 2016, Revival House was featured in enRoute, Air Canada’s inflight travel magazine.