Ringo Starr and his All Starr Band, Melissa Etheridge, the Beach Boys and Gordon Lightfoot return to Casino Rama Resort. 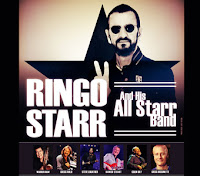